The US Election2016 has come and gone. What started last year as a joke and likened to hiphop rapper Kanye West’s laughable presidential ambition has come to pass. Yes. Mr Donald Trump the popular real estate mogul, best-selling author, casino “royale” and The Apprentice  Reality TV star is now on his way to the white house to make America great again. The world may not like it but here are the three things we learnt.

This year has been exceptionally crazy…and unbelievably so. First it was one Leicester city winning the highly competitive premier league title, then we had an unlikely Brexit happening. Shocking as those were, we haven’t had the last of the 2016 wonders. Fast forward to 9/11. Sorry 11/9 (still don’t know why month has to come before day. Crazy America!). Trump. Like always, he did it in the biggest way. He towered above Hillary in the most bizarre and dirtiest campaign in recent times by winning the electoral votes. It was against the run of play, against bookmaker’s prediction, against opinion polls, against public and international opinion. In fact against actual popular vote. He trumped the odds. This man talks crazy, irritatingly blunt, brash and bombastic. He has been labelled sexist, sexually aggressive and abusive, racist, yet he appealed to the innate feelings of the average American. This brings me to the next point. But before that, there was one other craze worth mentioning that I saw on twitter a couple of weeks ago. It was unbelievable. Bobrinski. Did I get the spelling? How and why (s)he trended still beats my intellectual mind. You said? “Kim Kard…” Oh yeah, that too. 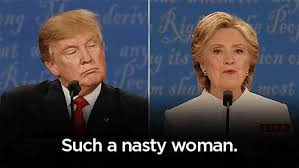 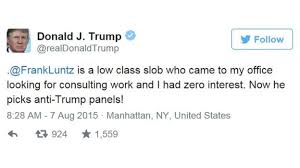 When some time ago, Emir of Kano took an 18-year-old as wife, there was uproar against him. Child bride! Child Abuse! Bla bla bla bla. When he started talking about the economy and how President Buhari should take decisive steps to rescue the present and future, people rose in applause. In fact some popular persons said it was an aberration to have had a brilliant economist like him to “waste away” on an inconsequential traditional throne. Trump has been married three times, has five children and boast of never having changed diapers for once! He said (paraphrasing); “I provide the money, they take care of the kids.” He has verbally assaulted almost everyone- of which Rossie O’Donnel and Megyn Kelly were chief- including the Pope! But when it came to the things that really are important to ordinary Americans like their healthcare, security, jobs and immigration policies, they found Trump to be their Robinhood. He would be their hero outside the elitist and politically correct Washington establishment. He promised something tangible and different. They need someone who has the guts and would get the job done. Clinton only hinged her campaign on Trump’s personal flaws (talking of which she is far from being a public saint either with her never-ending email scandal that was manifested in more public distrust for her than Trump), thinking no way in the world will this Twitter-happy Reality TV star will enter the gates of the White House as the world’s most powerful individual. Well, he will. Forget the protests. 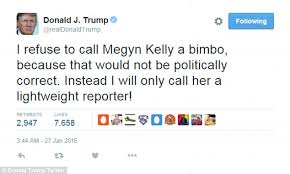 Women are not that petty and feminism is over rated

Obama’s presidency was historic but that ecstasy of having a minority and first black President has since waned and has gone to the history books like many other records. What was left with people were the regime itself, his policies, his decisions and the legacy he is leaving behind. It feels now that Americans are not really as enthusiastic of making another history of first female President if they cannot see a future in the presidency itself, how it will affect their children, pockets and security. It was as though they asked, “When the euphoria fades, what do we expect to see?” It turned out that one percent less women voted for Hillary than they did for Obama (55%), although more women voted for her in this election (54%). One would have thought that with the brazenly pathetic history of Trump regarding women, more than 80% of women would vote Hillary (which would automatically give her victory) probably leaving some prostitutes and some retarded female voters voting for neanderthal Trump. But women like all men, I think, are more rational than we most times assume. They want security, yes of course. They want guarantees. But they are not all about emotions and euphoria of bandwagon. They want guts. Most do not think Hillary is in the class of Theresa, Merkel or Thatcher. So we know feminism is not really what some folks have made it seem. There are certainly more pressing determinants in the hearts of real women on the street than “feminism” as it is brandished in social media. It is also not that women hate themselves, neither is it about the generally known feminine jealousies. Women, innately, are just not petty as new-age feminism portrays them.

I read a few days to Election2016 that the Kongi “threatened” America by promising to tear his green card if Mr Trump wins. Hehehe. My mind went straight to Baba Iyabo who used PDP to catch trips on TV when he tore his membership card in front of state members. We all knew PDP was going down and down they went. And they are still down. If Prof makes good his promise I would advise he does it on TV. That will make international headlines and he will become far more popular that it may evoke fresh envy from his fellow kinsman, stateman and rival of many years. On the other hand if he does, America may start ignoring Nigeria or deporting Nigerians, and President Buhari and APC will blame him. It was just a joke.

Popular Pastor T.B Joshua predicted Clinton the winner of the election. It was a prophecy. Well he said what he said based on “what he saw”. It turned out opposite. Most, if not all, reputable media were also wrong, even FOX. Most bookmakers were wrong too. Why slay him? As a matter of fact he said that the initial vision just few days before was that Trump won until tables turned in the mystical realm. How many people actually ever saw Trump winning at all? But he did and was bold enough to say it. Publicly. But then again, Pastor Joshua is human and sentiments may have had a role in the second vision. I can’t say. But don’t loathe him. Mercy.

The US Election2016 was just a little bit different from Nigeria’s 2015 edition. And that’s just because it didn’t take place in Nigeria. In almost everything else it was the same. Should we start from the dirty, “nasty”, down-to-the-gutter campaign against personality and not issues? Or the more prominent allegations of rigging? Or the FBI dragging Hillary in the mud few days to the elections- something our EFCC is known for? Or more importantly, the fact that the people had to choose between two unwanted candidates leaving them between the red devil and the deep blue sea? In the end America elected Trump who is 70. We elected Buhari at 72. Trump won swing states. Buhari won southwest. Goodluck called. Hillary called. What’s the difference? Kini big deal? 3 Replies to “Trump: When the world stood still”