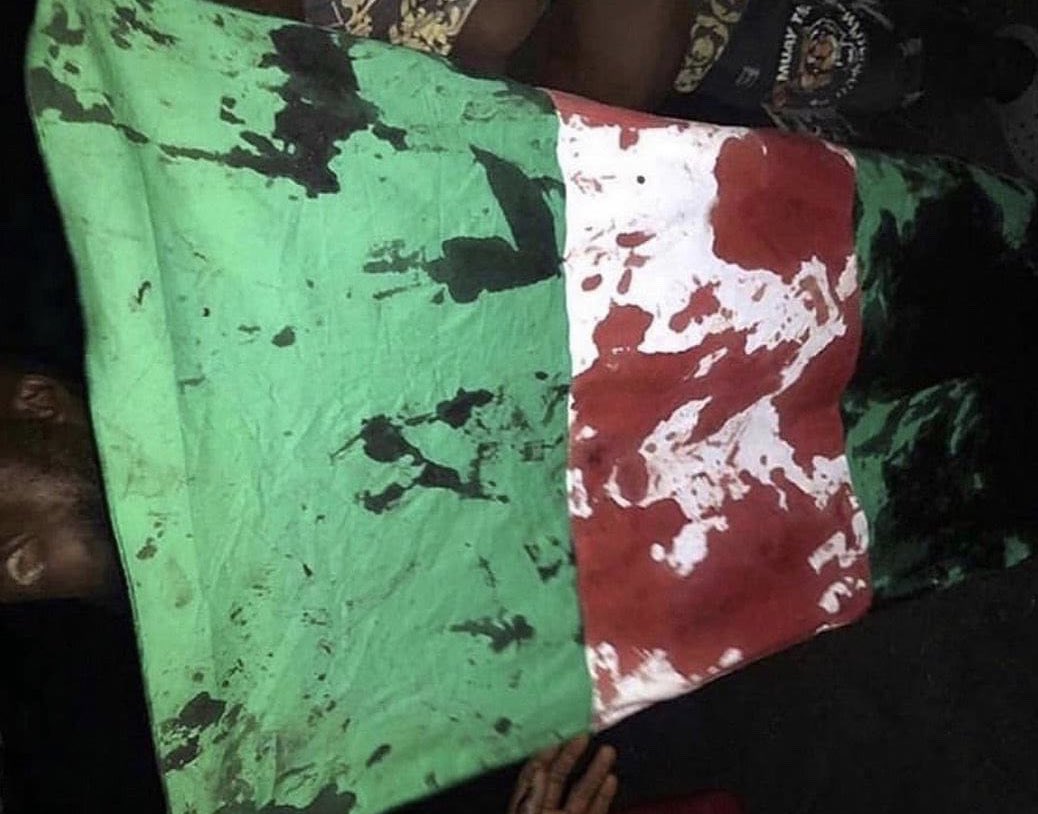 Lekki toll gate, 20/10/2020, 19:00. Night fell. The streetlights were put out. The moon was only starting to creep out. The people gathered. A dark cloud would descend on the expressway. It started raining. And thundering. The lightning and sounds were not from the sky. They were from the guns of armed military men pouring bullets on unarmed civilians under the shade of the dusky evening. It rained blood. Thanks to live Instagram feed and tweet from impassioned protesters from the scene, we saw the carnage with our eyes. The world watched. Tears at home and abroad. Blood on the street. Sorrow was the national emotion. Eyewitness reported 15 deaths on the scene smuggled away by the soldiers. Many injured, given first aid then taken to hospital. We later saw videos of witnesses (ambulance personnel) who said soldiers prevented access to help. Colleagues on-call in one of the hospitals reported they were slammed with bleeding patients from gunshot wounds. Blood banks were drained. Our flag was smeared in blood.

Same night, the Nigerian army denied what literarily played out before our eyes. They tweeted that the live video reports were fake news, perhaps barking it as an order that it should and must be fake news, consistently adding three exclamation marks! They continued. The state governor confirmed the presence of “forces” which he later affirmed to be men of the military. He also confirmed that there was an operation and called for an investigation into the operation. He visited hospitals treating the victims. Again, there were video evidences. He constitutionally and realistically could not command the armed forces. A Nigerian Army spokesperson later spoke live to media rebutting all videos of the night. As expert as he and his supposedly “only authorised” forensic military department were in identifying fake videos, he could not even remember the word “photoshopped” during the media briefing. This tells two things at least; they have not in fact looked at, discussed or investigated any video as he claimed. Otherwise what sort of amnesia of such an important term in modern graphic editing and forensics was that? Second, the army lacks insight to think that they hold monopoly of forensic investigating of a crime committed by them. He should have known that people do not trust whatever he had to say. Why should they trust their verdict? This crime against the state must be investigated by an independent party. Thankfully, people scavenged spent shells from the scene as evidence. Military ammunition are marked I understand.  Who ordered the killings? Unknown soldiers?

As the nation mourned next day, things started falling apart, unknown vandals and miscreants burnt police stations, public buildings, targeted media houses linked with a popular politician, huge bonfires on the roads. Prison was torched. Government warehouses and silos were broken into and Covid relief palliatives were carted away. Fuel to fire. The looting increased. More of such hoarded rice and noodles were discovered by hungry Nigerians across the country. And the hungry rightly took what belonged to them. Nigeria has passed the peak of the pandemic as there was no lockdown in any state. How come they had such humongous stockpile? For who? To be shared when? In 2023?

The media houses were silenced. They would not show the faces of protesters. They called them hoodlums- that word was irritatingly thrown around loosely. Only Arise TV (worth mentioning for their bravery) reported what happened on the streets as they toured Lagos with police team. People were hurting and speaking up. Yet our President remained silent. He could not be bothered. Neither were his handlers. But his deputy seemed bothered. He posted a series of tweets which appeared to have been written by himself as he not only signed it off, but we also saw pictures of him drafting the statement. The tone of them were empathetic, I could hear the voice of a father. However, Nigerians know better. We know he is not the President. On the third day, the President rose from the world of unknown.

Buhari spoke. Not to the media of course. Who dares question the emperor? The tall and gigantic emperor whose voice we must tremble to hear, or whose face we must scarcely see. Or we die. We must be content with a pre-recorded speech. We, like Moses cannot bear the lightning of this god in Aso Villa. Our President has spoken. Let us put everyone to silence, they thought. They did. The nation was indeed rendered numb by what they heard in 11 mins! Buhari’s speech was chilling and largely empty. One would wonder if he lacks mental capacity as matter of fact. Did he understand information given to him about Lekki shootings? Most certainly so. But all he referenced were extrajudicial killings by policemen not specifically military men shooting unarmed civilians. He did not mention Lekki once. Such coldness. He knows soldiers do not shoot unarmed or wounded soldiers. He should know better. He was a military general.

He told the international community to shut up and get their facts first before “jumping into conclusion”. There was not much international outrage for the ENDSARs movement until Lekki happened. It was the trigger point for global public figures to start speaking up. The pressure mounted and resulted in that cameo speech. So he reacted to the world’s condemnation of our military’s deadly act at Lekki. On this premise, he reacted to the Lekki shootings. He knows about it. He referred to it but did not address it. Instead of speaking to his people and calming their burning nerves, he chose the opposite. While he rebuffed the international community he effectively told Nigerians to go to hell. He threatened that we should not mistake his engagement for weakness. We should be grateful enough he listened to our demands and we then must off our mics. Mr President, it is your duty to listen to and respond to your people. It is not a privilege for us to hear you address us live. I cannot remember the last time the president answered questions live from the media. Which President does pre-recorded speech when your house is on fire? Why are the media houses not revolting against this nonsense? Even Trump as bullish as he is to mainstream media spoke to and answered questions from them every week perhaps daily during the height of the Covid crisis. He still answers questions every now and then. The media is a pillar of democracy. The necessity to ask questions is fundamental to sustaining it. Otherwise it becomes dictatorship.

Our president only gives heavily edited dead speeches once in a blue moon to a population of 200 million! Who does that? Who are his handlers? Who advises him on these terrible decisions? Who is gagging him? Who is writing those cold speeches? What is this cult-like culture in the Aso Villa where the President is barricaded from the people and reality? We want to know what the exact health status of our President is. Is he still mentally in charge? Or are we back to the late Yar-Adua era of unknowns? Who is really the anarchist at the villa? Who is our President? Unknown President?

A culture of impunity is when nobody can question elected officials. It is tragic if it happens at the presidency. No media can ask you questions in a live interview. If we are really going to blot out impunity from the security forces, we must first ensure there is democracy in Aso Villa.